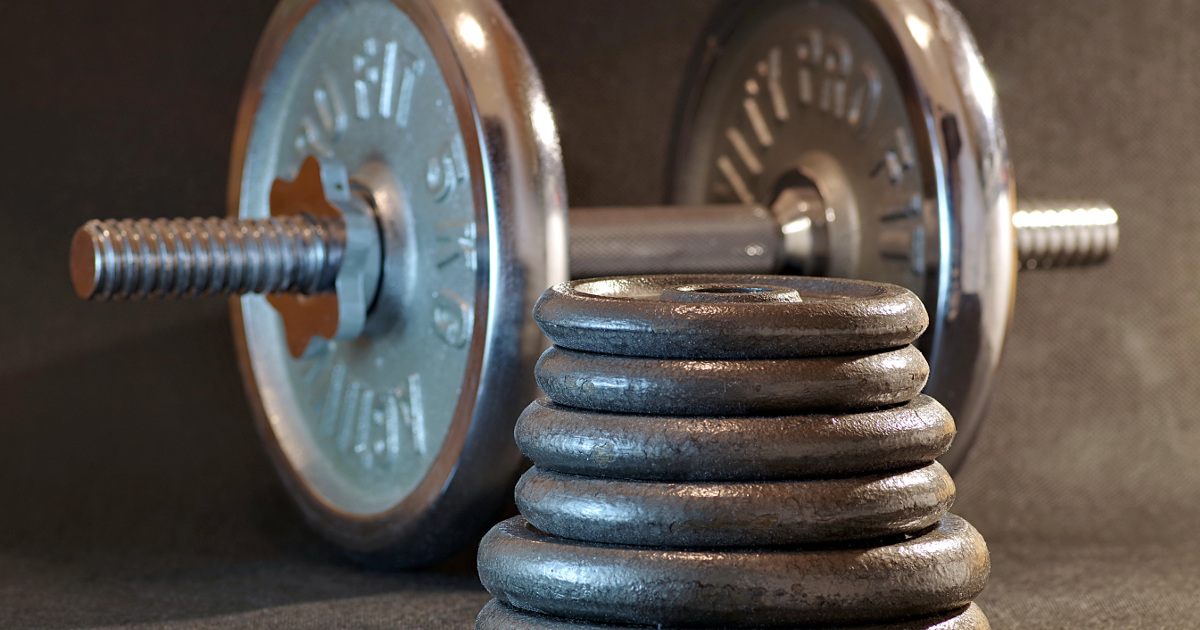 Some truths seem apparent but fade with time. Some truth just refuses to fade. As long as pushing iron for strength has been recorded, dumbbells have been the preferred solution. The reasons are many. Having trained for several decades, I have used a wide range of barbells, machines, and dumbbells finding value in each. As my training progressed however, I found that my training continued to gravitate toward dumbbells.

Research supports a broad preference for dumbbells in training. In his seminal volume Fitness: The Complete Guide, Frederick Hatfield made a compelling case for training with dumbbells:

“In comparison with any other method of resistance exercise, dumbbell training is the ultimate form of weight training. It is true for many reasons… they allow for synergistic and stabilizer muscles to come into play far more prominently than most machines.”

When using dumbbells, the stabilizer muscles must act in all directions, whereas machines and even a barbell connects your two hands together. Today’s dumbbells come in many forms such as Kettlebells, solid dumbbells, fixed-plate dumbbells, Olympic dumbbells, and Powerblock dumbbells. The dumbbell exercise constantly forces the athlete to adjust and readjust the position of the dumbbell(s). Synergistic (helping) muscles and stabilizer muscles act more prominently, which improves overall strength and protects against potential injuries. Dumbbell exercises can be tailored easily to more closely match the neurological patterns of associated sport skills owing to improved joint kinesthesis, leverage similarities, and total body involvement.

Beyond their functional superiority, a set of adjustable dumbbells is far less expensive and takes up less space than any other resistance equipment sold for the home, making them an ideal choice for the home gym.

Commercial gyms continue to have a staple of dumbbells as expected resources.

As a person that has trained now for decades, and as a personal trainer who often makes recommendations to others, I have found that dumbbells work very well in workout routines. For weight loss using a dumbbell routine, keep the heart rate up by limiting rest time between sets to no more than 60 seconds and weights in the range that will produce 10 to 12 reps for each set.

For strength building, extend the rest periods up into the 90 second range while at the same time increasing dumbbell weights to the point that 6 to 8 reps can be comfortably completed for each set.

While customized routines can be prepared based on your individual need, the following full-body dumbbell workout offers a solid foundation in an ongoing fitness regimen: 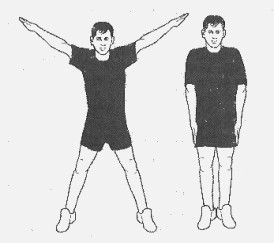 To warm up, I always start with 40 to 50 toe touches. This timeless classic gets the blood pumping, loosens the hamstrings, and abs. Start in a standing position, feet shoulder-width apart and arms held out to the sides at shoulder height. You then bend forward at the waist while twisting your body so you can touch the fingertips of your right hand to the toes of your left foot. Lift your torso back up, returning to the starting position, and repeat the move but twist to the right to touch the left fingertips to the right foot. Stand upright once more and repeat the movement, alternating sides as you go, for 30 seconds.

With little or no rest time, transition directly into 40 to 50 situps. Lying on your back with knees bent, feet flat on the ground and hands behind the head; (1) inhale and raise the torso by rounding the back, (2) exhale at the end of the movement, (3) return to the initial position without allowing your shoulders to touch the ground, continuing until you could do no more in strict form. Situps work the hip flexors as well as the oblique abdominal muscles, but they mainly work the rectus abdominis – that portion of your body where your “six pack” awaits your discovery.

Now that your blood is pumping pretty good, move quickly into working your legs with the dumbbell squat. Stand with the feet slightly apart, a dumbbell in each hand and the arms relaxed, looking straight ahead. Inhale, slightly arching the back, and bend the knees. When the thighs reach horizontal, extend the legs to return to the initial position. Exhale at the end of the upward exertion. This is a great overall leg exercise working the upper legs (quadriceps) and the glutes (your bottom). 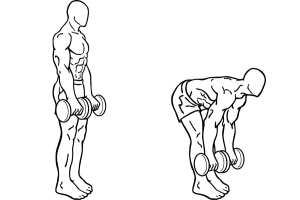 Standing with your feet slightly apart, begin your stiff legged dead lifts in a standing position with dumbbells in each hand hanging at your side. Inhale and bend at the waist with the chest forward, back arches, and legs initially as straight as possible. As you lean forward allow the hands to naturally swing to the front of each leg. Focus on keeping the weights near as possible to each leg as you descend. As the dumbbells go below the knee, allow your knees to bend lowering the weights with your legs. Stop the descent approximately 1/3 of the way down your lower leg. As you rise, you should feel the exertion primarily in your hamstrings, hips, glutes, abs, lower back, and lats (in that order!). To avoid injury, keep the back straight. 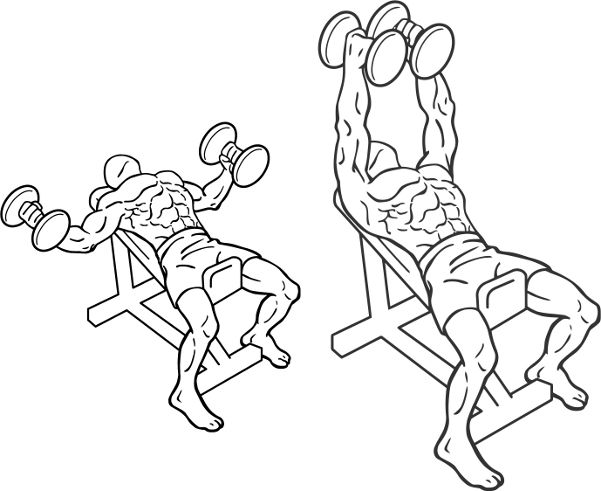 Lie on a narrow bench that won’t interfere with your shoulder movement and hold a dumbbell in each hand with arms extended or slightly bent to relieve pressure on the joint; (1) inhale and open the arms to horizontal, (2) raise the arms to vertical while exhaling, (3) squeeze your arms together with your pectoral muscles at the top of the movement. This exercise is always performed with only light to moderate weights. 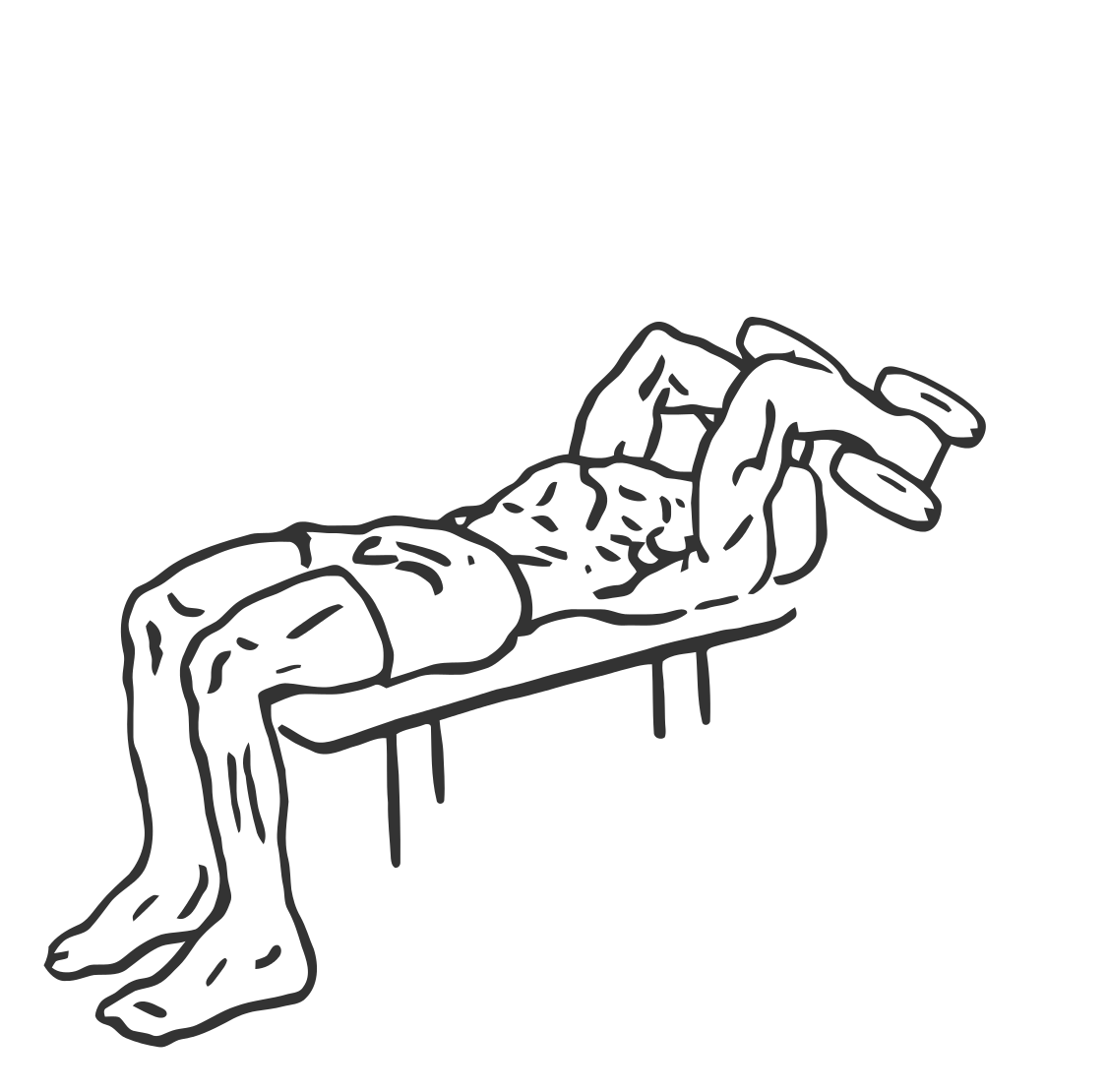 Lie on a flat bench and grasp a dumbbell with both hands on one end, keeping the dumbbell vertical; (1) inhale and lower the forearms by bending the elbow with a controlled movement, (2) return to the initial position, and (3) exhale at the end of the effort. 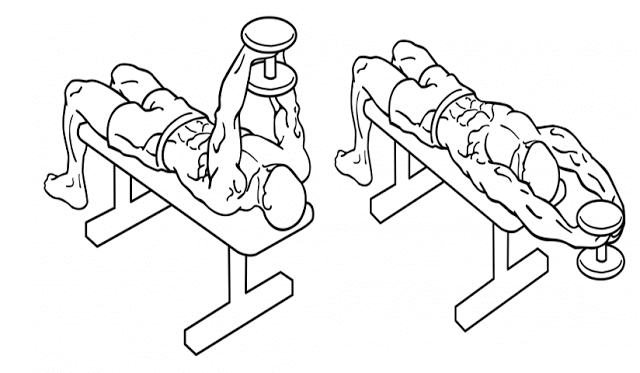 Lie on a bench with feet flat on the ground and hold a dumbbell in the palms of both hands, with the thumbs surrounding the handle and arms extended; (1) inhale and lower the dumbbell behind the head, bending slightly at the elbows, (2) exhale and return to the initial position. 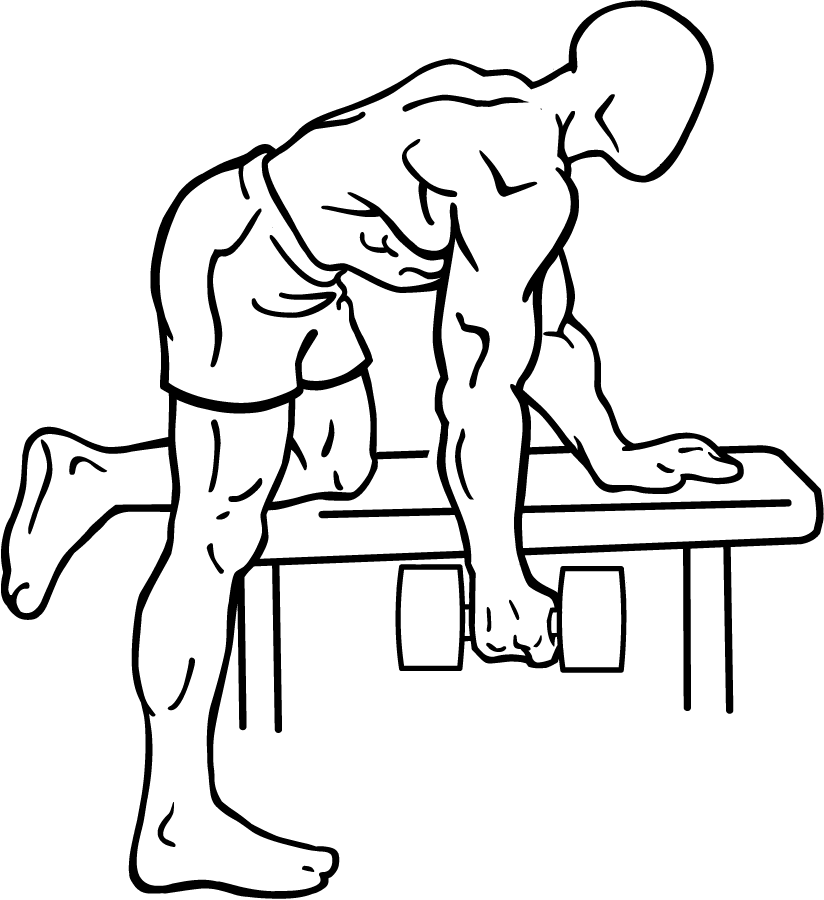 While supporting one knee on the bench, lean forward at approximately a 45-degree angle. Keep your back very flat hang your free arm by your side; hold a dumbbell straight down from your free hand, palm facing inward; (1) inhale and isometrically contract the abdominal core, pulling the dumbbell as high as possible while keeping the elbows close the body, squeezing the shoulder blade at the top of the movement, (2) lower the dumbbell to the original position while exhaling. 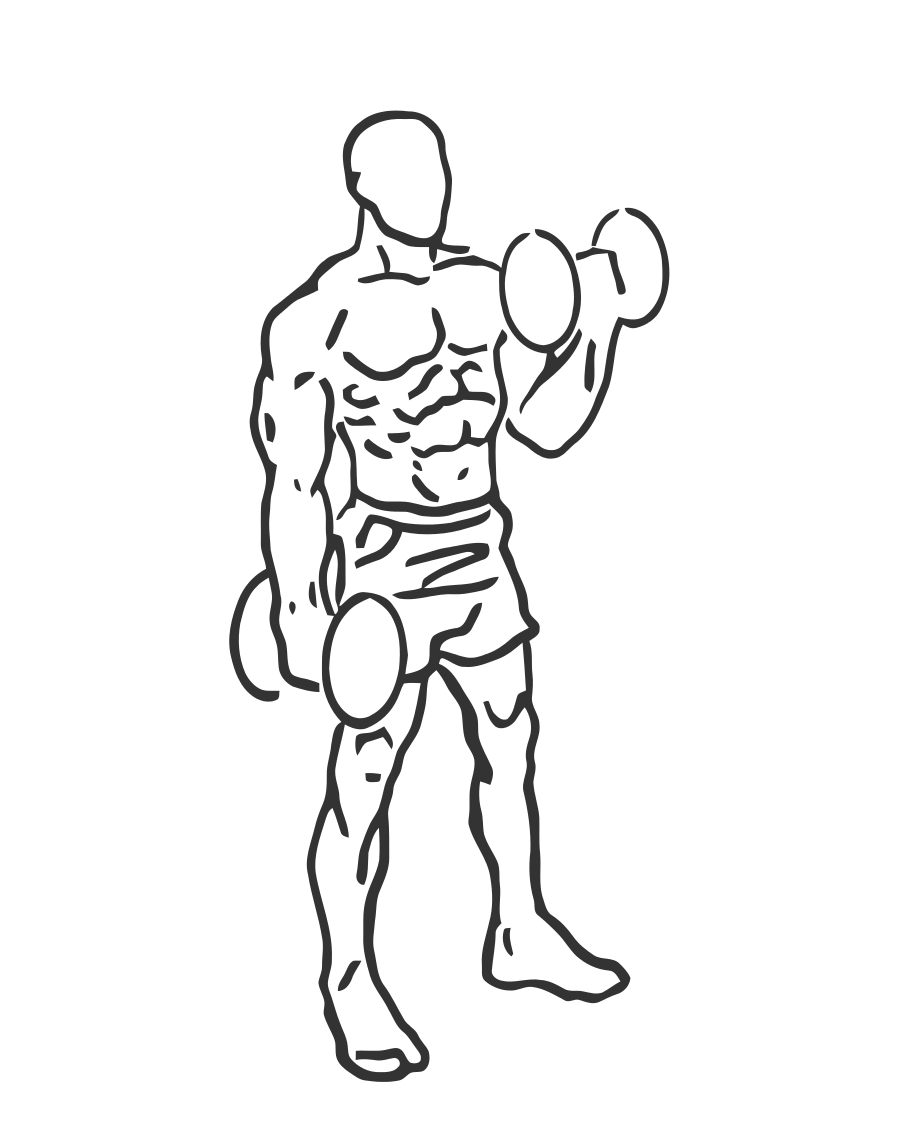 Holding a dumbbell in each hand with arms hanging down and the palms of the hands facing the body; (1) inhale and bend the elbow, rotating the palm up before the forearm reaches horizontal, (2) continue by raising the elbow at the end of the movement, and (3) exhale as you return the dumbbell to the initial position. Alternate the movement between arms, one at a time. 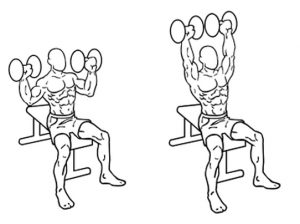 Seated on a bench, keeping the back straight, and holding the dumbbells at should level with an overhand grip (thumbs pointed inward); (1) inhale and extend the arms vertically upward, and (2) exhale at the end of the movement before lowering the weights carefully to the initial position.